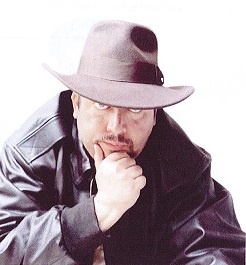 A graveside service will be 2:30pm Thursday, July 15, 2021 at Greenview Memorial Gardens in East Moline. Schroder Mortuary, Silvis is assisting the family with arrangements.

If Adam were writing this, he would have had you laughing after the first sentence.

Always a talented writer, Adam started his first column "Simply Adam" in the Joliet West high school newspaper. He followed it up writing for a number of college newspapers in the arts and entertainment field. He then entered the United States Navy and continued in journalism working on the newsletter. After the service, he went into retail management where he became a customer favorite as a Store Manager for Game Stop.

Adam’s creative talent was not limited to writing. He was also a gifted singer and a charismatic YouTube personality. He was in a band called Vent and also put out a solo CD. He started his website RaidersoftheLostFlicks.com where he reviewed hilariously bad movies and also guest hosted on a number of other YouTube channels.

To order memorial trees or send flowers to the family in memory of Adam Wilcox, please visit our flower store.