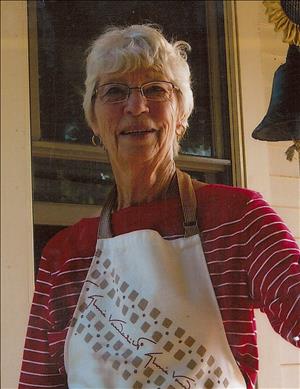 Funeral services will be 10am Thursday at Schroder Mortuary in Silvis. Visitation will be 4-7pm Wednesday at the mortuary. Burial will be at Greenview Memorial Gardens in East Moline. Memorials may be made to Cornerstone Christian Fellowship Church or a charity of one's choice.

Barbara was born June 29, 1936 in Seymour, IA the daughter of Byrl Bryant and Georgia Gaynelle Conn Wilson. She married Myron Lee James July 18, 1953 in Moline. Barbara worked at Barjan Products for several years before her retirement. She loved gardening and was proud that she was able to travel around the world twice. She was also a founding member and very active in her church, Cornerstone Christian Chruch. She was also a resource for the young mothers in her neighborhood.

Barbara was preceded in death by her son Michael in 1992 and an infant brother Phillip Byrl Wilson.
To order memorial trees or send flowers to the family in memory of Barbara James, please visit our flower store.