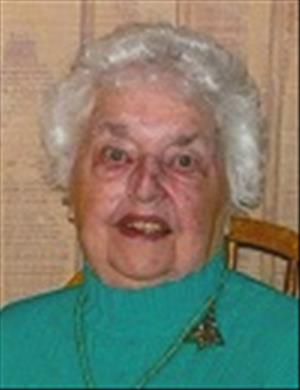 Darlene Needham, 92, formerly of Carbon Cliff passed away January 9, 2017, peacefully in her sleep at home. Despite our sorrow, we celebrate her reunion with her beloved husband.

The former Darlene Daisy Minteer was born February 2, 1924 in rural Mercer County to Earnest and Norma (Downey) Minteer. She married her lifelong sweetheart, Lewis L. Needham, on February 6, 1946 in Moline upon his return from WWII.

Darlene held various jobs over the years and retired from Sears in 1976 after 10 years of employment to focus all on her true calling: being a wife, mother, grandmother, and great-grandmother. The center of her life and focus of her devotion was her family, followed by her Church, friends, and neighbors. Darlene served on the Ladies Volunteer Fireman's Auxiliary for many years, the Carbon Cliff School's PTA, and was a member of the Golden Oldies Birthday Club. She was an active member of the United Methodist Church for 52 years, where she served as financial secretary for 32 years and sang in the choir.

Beautiful, wise, loving, and brave, Darlene possessed a tough inner strength that inspired, a gentleness that soothed, and a sharp sense of humor that delighted. She placed others' needs before her own and was always there for those in need of a firm and gentle hand to guide, steady, lift up, to give reassurance. Whether laughing at stories, soothing, or consoling in hardship, she always looked for the brighter side of any circumstance and the best in all people. Through years of decline, she kept her tough resolve and good humor to the last. Her life was an example of strength, generosity, patience, fierce loyalty, and selfless unfailing devotion that her family will look to and treasure always. She will be dearly missed.

Darlene was preceded in death by her parents; husband; great grandson Connor Weatherington; brothers Elwood (Fran) Minteer and Maynard Minteer and several beloved brothers and sisters in law.
To order memorial trees or send flowers to the family in memory of Darlene Needham, please visit our flower store.