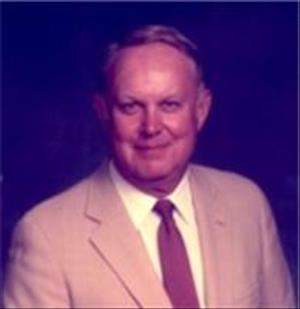 Demarest Ingraham (known all his life as Tony) died on July 2nd in Tucson, Arizona. He was 87. Tony was born on an Iowa farm and reared during the Great Depression. He began his working career at the age of six, selling newspapers. He ended it as a corporate executive. Tony joined Ralston Purina Company in 1949 after graduating from the University of Iowa. He spent much of his early career at the Purina plant in Davenport, where he worked his way up to the position of general manager. Eventually he transferred to corporate headquarters in St. Louis and was appointed vice president in charge of all pet food and cereal manufacturing. He later took the job of president of Van Camp Seafood (Chicken of the Sea), the leading seafood producer in the country and a Purina subsidiary. Tony was a leader, an innovator, a hard worker, a tough but fair negotiator, and a respected boss. Both a sportsman and a sports fan, Tony loved to fish, play golf and go bowling. He was a lifelong supporter of the Iowa Hawkeyes, for whom he played football. An extraordinary storyteller , Tony never failed to take time for anyone that wanted to talk. One of his maxims was, "Always take the time to listen to what someone has to say. It may not seem important to you, but it's important to him." Other favorites were, "If it's not right, just don't do it;" and "Treat everyone the same; you're no better than the guy standing next to you." Tony lived these words, and, in so doing, was rewarded with many, many friends.

Tony was preceded in death by wife Marion (Christiansen), mother of his children and Tony's soul mate for over 50 years. He is survived by his wife of 11 years, Georgia (Pickslay), his three children, Tim (wife Peggy), Vicki Jo (husband Jerry Cogelja), and Dave (wife Jacqueline), stepson David Ahmad (wife Kris), eight treasured grandchildren and two great-grandchildren. A visitation/viewing will be held on Thursday, July 23 from 4 p.m. to 7 p.m. at Schroder's Mortuary in Silvis, IL. Funeral services will be held at Schroder's on July 24 beginning at 10 a.m., followed by a private graveside service at the Rock Island Arsenal National Cemetery. A memorial celebration will be held in Tucson at a future date. In lieu of flowers, contributions are suggested to one of the organizations Tony supported: Boys & Girls Clubs of Tucson, Salvation Army (Tucson Chapter), or Lutheran Church of the Foothills in Tucson.
To order memorial trees or send flowers to the family in memory of Demerast Ingraham, please visit our flower store.