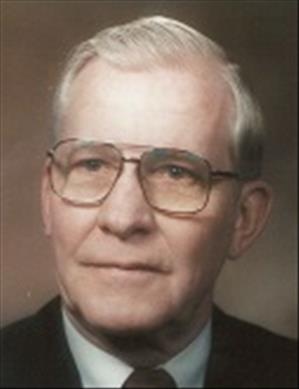 Donald W. Grundstrom was born January 12, 1923 in a farm house outside of Taylor Ridge, Illinois to Gust and Harriett (Hattie) Grundstrom. He began his education in a one-room school house in rural Taylor Ridge and continued it in another one-room school house in rural Orion after the family moved to a new farm. Don attended Orion High School graduating in 1940 with honors and played as a starter for the 1939-1940 Orion High School, Illinois State Champion, six-man football team for which he was inducted into Orion High School Athletic Hall of Fame. Having little interest in farm chores and at the encouragement of his two uncles, Don began his work career at Molder Union Malleable Iron Worksa�"Deere, East Moline in March of 1941, 2 months after his 18th birthday. He left Deere in 1943 to serve in the US Army Signal Corps. During basic training, he demonstrated a notable talent for mathematics and science, was admitted to the Army's Specialized Training Program and sent to Wheaton College to study mechanical engineering. Upon completion of that accelerated course work, he was deployed to the Pacific Theatre. Although he rarely spoke of it, Don was a member of the small military contingency who liberated the prisoners from Santo Tomas University Internment Camp in Manila in February of 1945. Both his military service and his part in the liberation of prisoners left an indelible impression on his love for his country and appreciation of his freedom. He also served many years in the Civil Air Patrol earning the rank of captain. In 1946, Don returned to Union Malleable--East Moline and embarked on a professional adventure he had not foreseen. Hard work and several promotions led to a transfer in 1951 as a foundry supervisor for John Deere Dubuque Tractor Works in Dubuque, Iowa. By 1953, he was appointed general supervisor in the foundry; and in 1961, his responsibilities broadened to foundry superintendent. Ten years later, he was appointed to a team tasked with the planning and construction of the new John Deere Tractor Works in Waterloo, Iowa. In 1977, he was named John Deere Waterloo Tractor Works foundry works manager; and in 1981, Don was promoted to the position of manager of the foundry operation for the newly named John Deere Component Works. 41 years after Don began pouring hot metal in the sand molds at East Moline, John Deere once again promoted Don as general manager of John Deere Foundry East Moline. He liked to say that he had come "full circle" and was returning to his home. He officially retired from Deere in 1985 but remained active with special assignments for Deere and Company until 1990.

Don maintained a love for foundry work and a desire to be a part in its development throughout and beyond his professional career. He was a member of the American Foundryman's Society for many years serving as its Director from 1980-1983 and again from 1984-1985. He was also a member of the National Foundry Association and held a Board of Directors seat from 1975-1985. He established and contributed to scholarship opportunities engendering the growth and education of young people interested in continuing their academic pursuits. Don led a full and active life crammed with travel, friends, cars and boats; or as he would say, "Not bad for the son of a sharecropper." However, his greatest passion, or as he referred to it, his "golf game" was his aircraft... vintage, open cockpit, biplanes from 1930, 1940, 1950, 1970 and 2004. He reveled in the fly-ins and air shows and was thrilled to be able to show off his prized planes while chatting with other pilots and vintage plane enthusiasts. He genuinely enjoyed being able to give WWII veteran pilots a ride in the Stearman reminiscent of their training planes. Although he made many dear pilot friends, it was his "proxy son," Dean Maupin, who kept the planes and Don flying when Don's vision issues threatened to ground him. August 1943, Don married Dorothy Beyer while he was in the service. July 1956, he married Betty Mae Keuter Cover. He is preceded in death by his loving wife Betty, son-in-law Tim Marshall, his brother Lyle and nephew Carlyle. He is survived by his sister Mildred Bowling of Moline, step-daughter, Judith Ann Marshall and step-grandson Christian Marshall of Dover, TN, nieces Carol (Bowling) Brien of Wheaton, IL, Kathleen (Rick) (Bowling) Deist of Warrenville, IL, Karen (Bowling) Kramer of East Moline, Theresa (Steve) Owens of Woodhull, Denise (Dave) Muse of Colona, nine great-nieces, two great-nephews, three great-great-nieces and three great-great-nephews, dear friend and comrade-in-adventure John Biondo, special friends Micky and Mike Krach along with many, many dear flying, boating and professional friends and neighbors. Don "went west" on May 24 surrounded by his family and friends. Private interment at Rock Island Arsenal National Cemetery was arranged through Schroder Funeral Home. There are no visitations or services. Donations may be made to Clarissa C. Cook Hospice House, Bettendorf, Iowa.
To order memorial trees or send flowers to the family in memory of Donald Grundstrom, please visit our flower store.