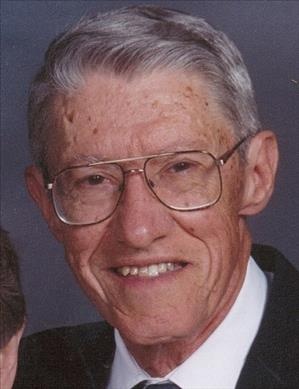 Duane Homer Mitchell loved the Lord Jesus Christ and went to be with him on October 1. He was born in Arthur, IL on December 4, 1927, the son of Homer W. Mitchell and Jessie (Erhardt) Mitchell. He had two brothers; George Isaac and Eugene Earl, both of whom are deceased.

Duane graduated from Moline High School in 1946 and soon after he entered the Army Air Force that same year. Duane followed up his military career by graduating from the University of Illinois in 1951. On July 18, 1953 Duane married Beverly J. Matzen, in East Moline. His loving wife Bev of 56 years passed away in September 2009.

In 1992 after 40 years of service Duane retired as General Manager of Accounting from Litton Industries. He was awarded the "Most Valuable Member" Plaque from National Association of Accountants in 1964.

Duane was a member of Homewood Evangelical Free Church in Moline and later in life for 3 years he had a very special friend, Buda Larson who joined the Lord Jesus in February 2015. Duane was an avid hunter, fisher and golfer. He was a big Cardinal and Illini fan.

Funeral services will be 11 am Saturday at Homewood Evangelical Free Church with visitation 2 hours prior to service time. Burial will follow at Greenview Memorial Gardens in East Moline. Memorials may be made to the church.
To order memorial trees or send flowers to the family in memory of Duane Mitchell, please visit our flower store.