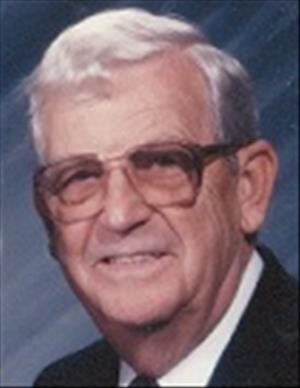 Services will be private. Schroder Mortuary in Silvis is assisting the family with arrangements.

After experiencing polio as a toddler, Ed went on to enlist in the U.S. Army ultimately landing on Omaha Beach on D-Day in WWII as a part of the Signal Corps. He returned home to his job on the Rock Island Lines where he was hired after graduating from East Moline High School 1941. Ed retired from the 'ROCK' as office manager of the 'HUMP' yard in Silvis after nearly 40 years of service. He then became a realtor for Mel Foster before retiring permanently. In his post retirement, Ed enjoyed travelling with his wife of 70 years, Olive, and following his grandson to numerous activities. He also made a game of planning (for months) where their next winter away would be... Florida or Arizona or Hawaii??? It seems he always won that game.

Ed particularly enjoyed music playing the saxophone throughout high school; he tells of 'jamming' with Louis Bellson and others in the basement of the Bellson Music Shop in Moline. He later played in Army bands and other local dance bands. Ed also had an excellent voice. He sang/soloed at many local occasions and in the Silvis Methodist Church with Olive for 25 years. His last public solo was 'The Lord's Prayer' at his son and daughter-in-law's wedding.

Ed was the founder and first Commander of the East Moline AMVETS Post 145. He was also coAfounder of the Silvis Little League in the mid-1950's and participated on the Silvis Grade School Board Of Education. Ed represented Silvis on the Rock Island County Metropolitan Mass Transit District; he was a 16th degree Mason.

Survivors include his son Kirk (LuAnn) Haydon of Hampton and grandson Brent Haydon of East Moline.

Ed was preceded in death by his parents; wife; brothers Richard and James and a sister Geneice Kay.

As has been quoted, Ed 'had the perfect blend of charm and orneriness.'
To order memorial trees or send flowers to the family in memory of Edward Haydon, please visit our flower store.