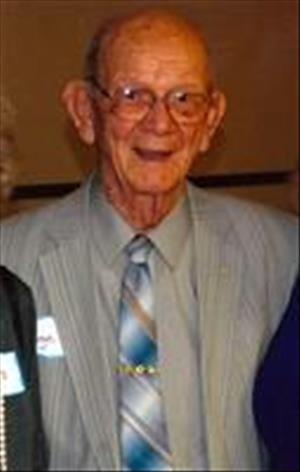 George Edward Volrath, 98, a resident of the Masonic Village, Bettendorf, passed away Sunday, September 8, 2013, from the effects of a stroke he suffered on September 3. His body has been donated to science for study at the University of Iowa. He was born on August 23, 1915 in Dubuque, Iowa, to George Valentine and Lillian Brown Volrath. He married Margaret "Midge" Reimers on September 3, 1935 in Davenport; she passed away on March 4, 2001. He married Lois Sommers Reimers on May 1, 2002.

He attended Davenport schools and graduated from Davenport Central High School. During his late teens he worked for the Civilian Conservation Corps building roads in southern states. He was employed by International Harvester Company for over 40 years, working many jobs including Quality Control Analyst and retiring as a Process Engineer. During the 1940's he was a representative and union organizer throughout the Midwest securing the rights of workers. He served in the Army at the end of World War II, guarding German Soldiers in the Northwestern USA. George was a Justice of the Peace in Princeton, Iowa, where the family lived for many years. He was a proud member of the Scottish Rite of Freemasonry (Masons), Bellevue Lodge No. 51; Kaaba Shriners, Davenport; American Mensa, Ltd and Intertel.

In addition to spending time with his family, he enjoyed walking, reading, working crossword puzzles and telling stories about his lifetime of experiences. In the years when he was raising a family, he provided food for the table by hunting, fishing and tending a large vegetable garden.

A Celebration of Life is planned for October 5th from 1-4 at the Masonic Center, 511 Veterans Memorial Parkway, Davenport, Iowa.

Memorials may be sent to Schroder Mortuary, Silvis, IL. Memorials will be made to the Shriners Hospital for Children, Chicago, IL.
To order memorial trees or send flowers to the family in memory of George Volrath, please visit our flower store.