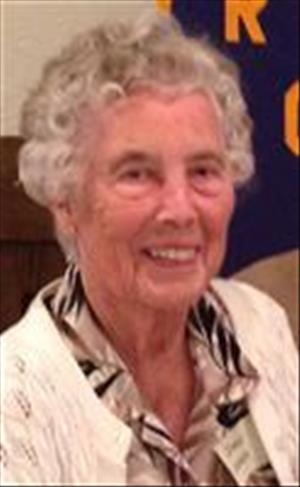 Irma L. Jones, 90, of Port Byron, formerly of Silvis, passed away Friday, Dec. 5, 2014, at Clarissa C. Cook Hospice House, Bettendorf. Visitation will be 4-7 p.m. Tuesday at Schroder Mortuary in Silvis. Services will be 11 a.m. Wednesday at Christ United Methodist Church in East Moline. Burial will be at Greenview Memorial Gardens in East Moline. In lieu of flowers and gifts, memorials may be made to the scholarship fund at United Township High School in Irma's name. Irma Louise Jones was born in Hannibal, Mo., on May 31, 1924, to Irwin and Emma Heinze. She graduated from Hannibal High School in 1941 and attended Hannibal LaGrange College for one year before going to the University of Missouri in Columbus, Mo. She graduated June 6, 1945, with a BS in home economics. She married Ensign Paul H. Jones Jr., of Silvis, June 7, 1945, at St. John's Lutheran Church in Hannibal. After WWII they lived in Silvis where their three children were born. Irma taught in the Silvis and East Moline grade schools for several years before teaching home economics at United Township High School in East Moline. She earned her master's degree from Western Illinois University in 1978 and retired in 1985 as a department chairman after 20 years. In 1978, Irma and her husband moved to a home in Port Byron and enjoyed many years of boating. After retiring, they spent winters in Ft. Myers, Fla., where they enjoyed playing golf. She was lady golfer of the year in 2007. They vacationed many years on the island of St. Martin's. Irma is survived by her husband, Paul; and three children, Carl (Georgia), of Fullerton, Calif., Linda (Allen) Spivey, of Winters, Texas, and Marilyn (Dave) Simmons, of Louisville, Ky. She has seven grandchildren and nine great-grandchildren. Irma is preceded in death by her parents; brother, Robert; granddaughter, Elizabeth Simmons; and a great-grandson, Peter Cabrera.

Visitation is Tuesday December 9, 2014 from 4 to 7 pm at the mortuary. Funeral services are 11 am Wednesday December 10, 2014 at Christ United Methodist Church, East Moline
To order memorial trees or send flowers to the family in memory of Irma Jones, please visit our flower store.