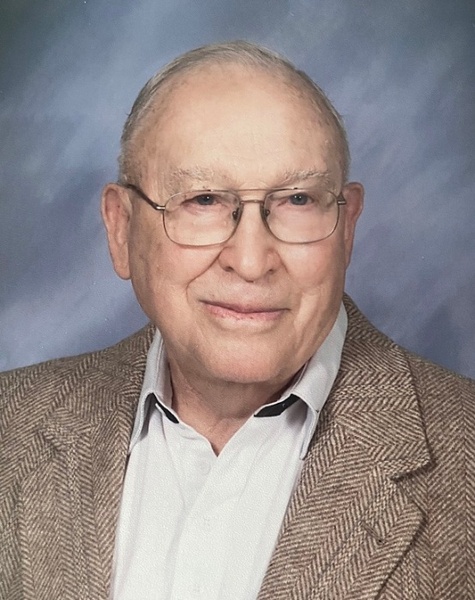 James W. Busenbark, 96, of Peoria passed away July 8, 2021 at his home The Villas of Holly Brook in Peoria.

A mass of Christian burial will be 11am Wednesday at St. Patrick’s Catholic Church in Colona. Visitation will be 1 hour prior to service time at Schroder Mortuary, Colona. Entombment will be in St. Mary’s Cemetery in East Moline. Memorials may be made to St. Jude Children's Hospital.

James was born September 3, 1924 in Cleveland, IL the son of George and Elizabeth Wachtel Busenbark. He married Frances “Frannie” Bogaert November 21, 1946 in Colona, IL. She passed away November 4, 2010. He served in the Army as a radio operator during WWII and was also in the Battle of the Bulge. James worked as a welder for John Deere for 41 years, retiring in 1984. He was an avid Cubs fan and enjoyed woodworking and golfing. He was a member of the Holy Name Society and was very active at St. Patrick’s Catholic Church until he moved to Peoria.

James was preceded in death by his parents, wife, two sons in law, and a great granddaughter Chelsea Jones, three brothers, and one sister.

To order memorial trees or send flowers to the family in memory of James Busenbark, please visit our flower store.