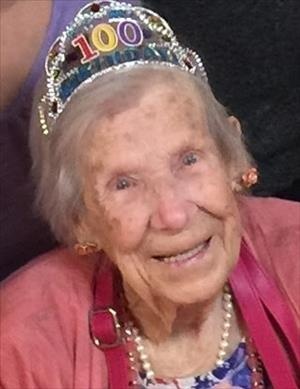 Service will be 12pm Friday at Schroder Mortuary in Silvis, with Visitations two hours prior from 10-12pm. Entombment will be at St. Mary's Cemetery in East Moline. Memorials may be made to the Breakfast Optimist Club for Children's Cancer Fund.

LaSalle Orlean Efting was born in Sheldon, Iowa on August 22, 1917. She was the Daughter of Gerett Efting and Marie Druger. They later moved to a farm in Sibley, Iowa. LaSalle married Levio Columbia (Columbo) in 1938. They were later divorced. She married Wayne Gasahl in 1965 in Sibley, Iowa, where they later retired from the Family owned Gasahl Pharmacy. On retiring they moved to Branson, Missouri and opened a Turquoise Jewelry Store. Her husband later passed away. In her early Year's she worked for Dr. Otis and then Pat Sundine. While retired, she enjoyed reading, hanging out at McDonalds, shopping at The Salvation Army and Goodwill.