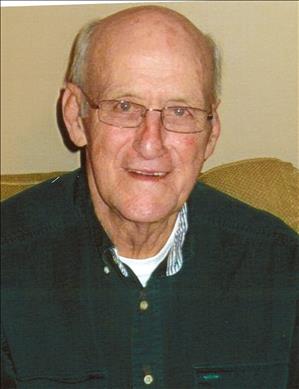 Funeral services will be 2 p.m. Saturday at Christ United Methodist Church in East Moline. Visitation will be 4-7 p.m. Friday at Schroder Mortuary in Silvis. Burial will be at Greenview Memorial Gardens in East Moline. Memorials may be made to Gilda's Club of the Quad Cities or Habitat Restore.

Lawrence was born June 13, 1928, in Keswick, Iowa, the son of David Sr. and Carrie Kuntz Crane. He served in the Navy during the Korean Conflict. He participated in the Honor Flight in April of 2014. He married Virginia Messenger April 9, 1951, in Westchester, Calif. She passed away Feb. 25, 2008.

Lawrence worked at Deere and Company, retiring in 1985. He loved camping and enjoyed woodworking and stained glass work. He also enjoyed volunteering his time at Gilda's Club of the Quad Cities and Habitat Restore in Davenport.

Lawrence was preceded in death by his parents; wife, Virginia; sister, Lois Paxton; brothers, Harry, David Jr. and Robert; and a daughter-in-law, Karen Crane.
To order memorial trees or send flowers to the family in memory of Lawrence Crane, please visit our flower store.