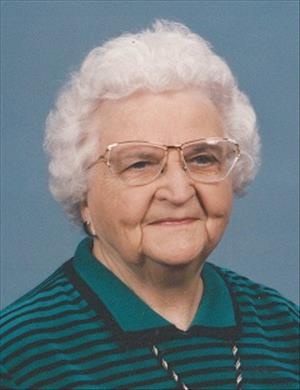 Leota A. Sahr, 108, of Schaumberg, IL formerly a long time resident of Silvis passed away August 4, 2017 at Friendship Village in Schaumberg, IL at the age of 108.

Funeral services will be 11am Saturday at Schroder Mortuary in Silvis. Visitation will be 9:30am until service time at the mortuary. Burial will follow at Greenview Memorial Gardens in East Moline. Memorials may be made to First Baptist Church of Silvis.

Leota was born Sept. 26, 1908 in Twin Brooks, SD the daughter of Richard and Hannah Bohn. She graduated from Northern State Teachers College in Aberdeen, SD and taught in rural schools for 5 years. After her marriage to Virgil Sahr on July 13, 1936 in Odessa, MN she moved to Silvis and resided there until 1998.Leota was a secretary at McKinley Grade School in Silvis.

Leota was preceded in death by her parents; husband; son Richard Sahr and a daughter in law Janice Sahr.
To order memorial trees or send flowers to the family in memory of Leota Sahr, please visit our flower store.