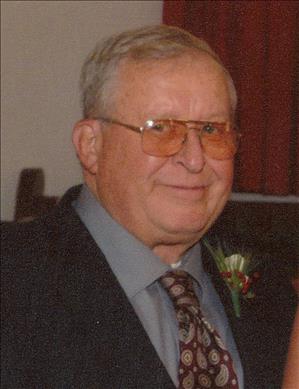 A visitation will be 4-7pm Friday, December 30th at Schroder Mortuary in Colona. Memorial Service will be 10:30am Saturday December 31, 2016 at Bethel Baptist Church Port Byron. Memorials may be made to the Colona Food Pantry, Henry County Senior Center, Wounded Warriors or Honor Flight of the Quad Cities.

Leroy was born June 5, 1932 in Moline, IL the son of Melvin and Irene Peters Woolley. He lost his mother at an early age, and was then raised by his father Melvin and his stepmother Dolly. Leroy married Jean Griffin February 7, 1953 at Sacred Heart Catholic Church in Moline. He served in the Navy during the Korean Conflict. He worked as a truck driver and retired from Dohrn Transfer. Leroy was a member of the Rock River Rodders Car Club, the American Legion and was an officer at the Moose Lodge in Geneseo. He enjoyed camping, fishing, tinkering with old cars and was an avid gardener.

Leroy was preceded in death by his parents Melvin and Irene Woolley; step mother Dolly Woolley; sister MaryAlice VanVooren and a brother Wayne Woolley.
To order memorial trees or send flowers to the family in memory of Leroy Woolley, please visit our flower store.