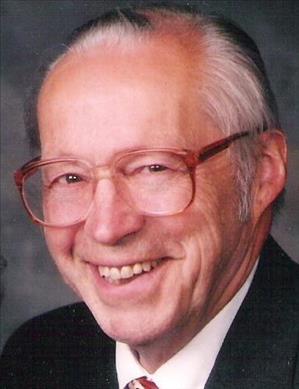 Louis William Burghgrave, 96, of Colona, IL died August 17, 2016 at Illini Restorative Care Hospice in Silvis, IL, surrounded by his family. Louis passed away peacefully after a short illness. He will be remembered as a loving figure by his family, in his church and community.

Visitation will be 12-4pm Sunday at Schroder Mortuary in Colona, 213 1st Street, Colona, IL 61241 with a rosary and Chaplet of Divine Mercy at 3:30pm. A funeral is scheduled for Monday at 11:00 a.m. at St. Patrick's Catholic Church of Colona. Interment will be at Greenview Memorial Gardens. Father Peter Zorjan will officiate the ceremony. All are welcome to attend and celebrate Louie's life. Memorials may be made to the Colona Lions Club or St. Patrick's Catholic Church.

Louis was born on February 9, 1920 in Coblenz, Germany to Peter and Gertrude Patt Burghgrave. His parents settled in Moline, IL when he was a child. He attended Moline High School, graduating in 1938. He joined the Navy just before WWII and served aboard several destroyers through the duration of the war. Louis married Marguerite Crafton July 4, 1942 in Rock Island. She passed away Sept. 25, 2005. After the war, he held several jobs in the Quad-cities before settling in Green Rock (now Colona), IL, serving as a rural postal carrier and managing a grocery store with his in-laws. He owned and managed the B&C Market until his retirement in 1985. He received the first "Businessman of the Year Award" from Colona in 1981. Louis was an accomplished vocalist and often sang at weddings and other religious events. He was a hard-working individual, active in his community as a member of the Colona Fire Department (the last remaining charter member), the VFW and American Legion, and was an active and dedicated member of St. Patrick's Catholic Church of Colona, where he had served for many years in the Holy Name Society.

Louis is survived by his children, Diana Crim of Laconia, NH, Bill (Judy) Burghgrave of Normal, IL, Brian Burghgrave (Barbara) of Geneseo, IL, Patrick Burghgrave (Karen) of Loveland CO, Andrea Allison (Dave) of East Moline, IL., his brother Rene Burghgrave of Sacramento, CA, his eleven grandchildren, his eight great-grandchildren, and several nieces and nephews. He was preceded in death by his parents, wife and a sister in law Mary Ann.
To order memorial trees or send flowers to the family in memory of Louis Burghgrave, please visit our flower store.