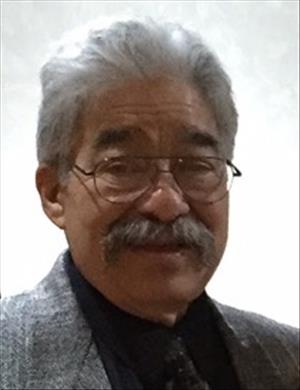 Funeral services will be 6pm Wednesday at Schroder Mortuary in Silvis. Visitation will be 4pm until service time. Burial will be at a later date. In lieu of flowers Memorials may be made to Angelman Syndrome Foundation.

Michael was born Sept. 26, 1944 in Moline, IL the son of Joseph and Nellie Segura Sandoval. He married Carolyn Rohren March 11, 1972 in Rock Island. Michael worked at Rock Island Lines until they closed. He later retired from Lamco. He enjoyed football, baseball, fishing and playing cards. He loved being a jokester and keeping everyone around him laughing. He especially loved spending time with his grandchildren.

Michael was preceded in death by his parents.

The family would like to give a special thank you to friends Richard (Cowboy) Doyle and Bob Pyevich for making his stay at Rosewood full of laughter and smiles. They would also like to thank the staff at Rosewood for being just as silly as he was and a special thank you to "Commander in Chief" Dawsyn for the tough therapy sessions.
To order memorial trees or send flowers to the family in memory of Michael Sandoval, please visit our flower store.