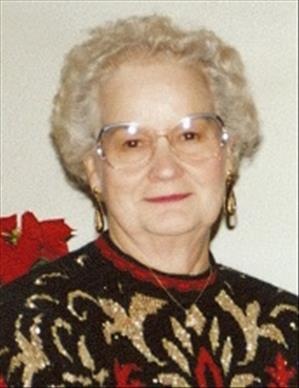 Funeral services are 11am Wednesday at Schroder Mortuary in Silvis with visitation from 9am until service time. In lieu of flowers, memorials may be made to St. John's Lutheran Church, East Moline.

Pearl Irene Doggett was born April 30, 1927, in Cave-in-Rock, Illinois, the daughter of Paul and Cora Moody Doggett. She married Russell Chapman in 1942 and they had two sons together. Later, she married Ivan (Red) Hand in 1957. He died in 1992. She was employed for 30 years by the State of Illinois, working in the nursing department at the former East Moline State Hospital and the Galesburg Mental Health Center. She retired May 1, 1987. She is a member of St. John's Lutheran Church, East Moline.

She was preceded in death by her husband, two brothers, James and Charles, a granddaughter, Katherine Chapman, and a grandson, Kendrick Esparza.
To order memorial trees or send flowers to the family in memory of Pearl Hand, please visit our flower store.