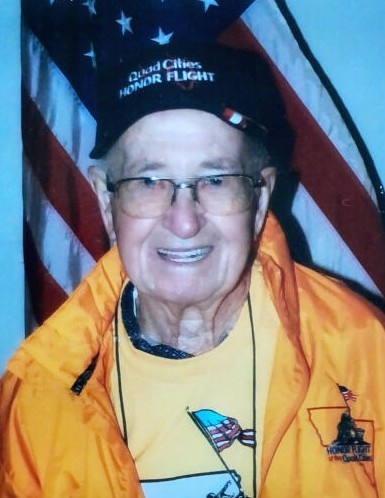 A memorial service will be 11am Saturday, July 17, 2021 at Schroder Mortuary in Silvis with visitation 1 hour prior to service time. Burial will follow at Greenview Memorial Gardens in East Moline. Memorials may be made to Compassus Living Foundation or Honor Flight.

Roy was born January 8, 1923 in Girard, IL the son of Paul and Mabel Fox Stottler. He married Margaret Peterson on December 20,1947 and together they had four children. He later married Jane Wortman September 20, 1975 in Silvis, IL. She passed away September 4, 2010. Roy served in the Army during WWII. He was proud to have participated in the Quad Cities Honor Flight in 2011.  He was the co-owner/operator of Ben and Roy’s Conoco in Silvis for 33 years with his brother-in-law Ben Bahnks. He enjoyed spending time with his family, hunting, fishing, golfing, bowling, traveling, and eating out.

To order memorial trees or send flowers to the family in memory of Roy Stottler, please visit our flower store.