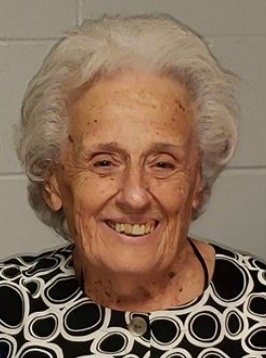 Funeral services will be Friday 11:30AM at Schroder Mortuary, Silvis, with visitation 1 hour prior.  Burial will follow at the National Cemetery in Rock Island. In lieu of flowers memorials may be made to the East Moline Public Library.

Sadie was born September 15, 1918 in East Moline the daughter of Stephen and Pearl Ligino Churuvia. She married John P. Tomich June 8, 1946 in Moline, IL. He passed away July 12, 2002. Sadie worked as an insurance coordinator for John Deere retiring in 1980.

Sadie was a caregiver to many family members that passed before her. Sadie along with her friend Donna would play piano and sing every Wednesday at a local area senior living home. Sadie was an avid reader, and loved to dance especially to big band and Polka music.  Some of Sadie's fondest memories involved dancing. During WWII Sadie and several of her girl friends would travel by train to Colorado and worked at the USO Clubs and Lounges as Coat and Hat Check Girls, Waitresses, Hostesses, and danced with the servicemen on leave. There was never a time when Sadie wasn't tapping her toe to one of her favorite songs or dancing with a broom while cleaning the house.

Sadie and her husband John loved to travel and were lucky to have travelled the world extensively. Some of their favorite destinations were Hawaii, Switzerland, and Austria. Sadie had a heart of gold, and was always willing and able to help a friend or family member in need. She will be missed dearly!  May her memory be eternal.

Sadie was preceded in death by her parents, husband, sisters Stella, Sophie, and Mildred and brothers Michael, Nick, John, and Walt.

To order memorial trees or send flowers to the family in memory of Sadie Tomich, please visit our flower store.