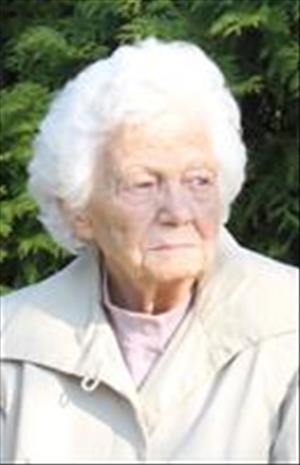 Thelma Mae Miehe, 89, formerly of Dubuque, passed away Thursday, October 10, 2013, at the Clarissa Cook Hospice House in Bettendorf, Iowa. In accordance with her wishes, there will be no formal service. Burial will be in Linwood Cemetery, Dubuque, Iowa. The family will hold a private memorial service at a later time. Online condolences can be left at www.schrodermortuary.com.

Thelma was born August 8, 1924, in Dubuque County, Iowa, the daughter of Peter and Viola (Frederick) Jecklin. She graduated from Dubuque Senior High School in 1941 and married Wilfred H. Miehe on March 23, 1946 in Dubuque, IA. He preceded her in death on October 30, 1980.

Through the years, Thelma held a variety of positions including those at: Higley Meyer, AY McDonald, Brookside Dairy, Washington Jr. High School, Jefferson Jr. High School, and Dr. Daniel Bolgren's Office. After being there almost 24 years, she retired from Dr. Bolgren's office in 2004.

Thelma loved (and was very talented at) sewing and quilting. She also enjoyed watching sports (especially the Hawkeyes), baking, and spoiling her grandchildren.

She was preceded in death by her parents, step-mother Elizabeth, infant step-sister Adele, husband, and brother Donald Jecklin.

Thelma was most proud of her children, grandchildren and great-grandchildren, who will miss her more than words can express.

The family would like to say thank you to the staff and volunteers at Senior Star Assisted Living, Genesis Hospice, and Clarissa Cook Hospice House for their compassionate care.

Memorial donations can be made to the Clarissa Cook Hospice House or the American Cancer Society.
To order memorial trees or send flowers to the family in memory of Thelma Miehe, please visit our flower store.