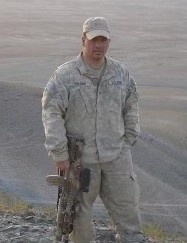 Funeral services will be 3pm Saturday, February 5, 2022 at Riverview Freewill Baptist Church in Bettendorf with visitation 2 hours prior to service time. Burial will be at Rock Island National Cemetery at a later date. Memorials may be made to the family.

Timothy was born February 8, 1971 in Davenport, IA the son of Cleo and Nancy (Sales) Baldwin. He married Kristine Kelly November 9, 2012 in Las Vegas, NV. Tim served all his adult life in the military and law enforcement. He served in the Army during the Persian Gulf War and reenlisted after 9/11 and serving in Afghanistan during the War on Terror.  He most recently worked as a corrections officer for the Scott County Sherrif. Tim enjoyed sports, especially the Hawkeye’s and Cubs, going to the shooting range, and spending time with his son.

Tim was preceded in death by his parents.

To order memorial trees or send flowers to the family in memory of Timothy Baldwin, please visit our flower store.