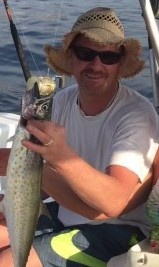 Per his wishes he will be cremated, and a celebration of life will be at a later date. Schroder Mortuary, Colona is assisting the family with arrangements.

Troy was born June 15, 1969 in Britt, IA the son of Robert and Suzanne (Larson) Barkema. He married Amy Jilovec in March of 1997 and later married Christine Mercer in May of 2015. Troy was a very hard worker and a proud Journeyman Lineman for several different contractors. He could handle anything and often said he was one tough SOB. He enjoyed hunting, fishing, and being outdoors. He was a gifted craftsman and enjoyed building furniture and woodworking. Troy was kindhearted and loved life and his family.

Survivors include his parents Robert and Suzanne Barkema of Muscatine, IA; son Blake Barkema of Mechanicsville, IA; brother Travis (Kris) Barkema of Washington, IA and their children Chase and Halle; his significant other Chris Barkema and his dog Chopper.

Troy was preceded in death by his grandparents, his labrador’s Kane and Suzy, and his chihuahua Cheeba.

To order memorial trees or send flowers to the family in memory of Troy A. Barkema, please visit our flower store.