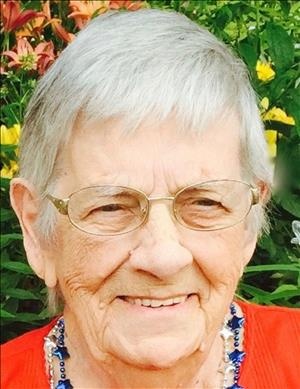 Funeral services will be held at 10:00 a.m. on Saturday, January 6 at Schroder Mortuary, Colona, IL, with visitation one hour prior to time of service. Burial will follow at Forest Cemetery in Oskaloosa, IA. Memorials may be made to the family or a charity of choice.

Twyla graduated from Fremont High School in 1934, where she loved playing softball and basketball. She married William Murphy on August 5, 1936 in Lancaster, MO and they were blessed with four children. William passed away June 28, 1957. Twyla worked in the food industry, retiring in 1985 from Lutheran Hospital in Moline, IL. She cherished time with her family and enjoyed watching basketball, taking road trips, collecting wind chimes and commemorative plates, and especially enjoyed her many backyard bird feeders. To her family, she is a recipe shared, a story told, and a memory made. Those left to cherish Twyla's memory, and her 101 years of love and laughter, are her children, William "Bill" (Karen) Murphy of South Lyon, MI; Janice (Bob) Seys of Coal Valley, IL; and Shirley King of Silvis, IL; 10 grandchildren, Dawn (Jack) Shelton, Darcy (Eric Englund) Holle, Shelly Sarfate, Marti (Steve) Harmon, Derrick (Anne) Seys, Deb Crowe, Teri Zenner, Dayna (Gary) Mitchell, Darren (Shelbie) Seys, Damon (Joy) Seys; 25 great-grandchildren and 4 great-great-grandchildren, as well as her sister-in-law, Jane Arganbright of Minnesota. Twyla was preceded in death by her parents, husband and daughter and son-in-law, Sandra and John Walgrave, and two sisters and a brother.
To order memorial trees or send flowers to the family in memory of Twyla Murphy, please visit our flower store.