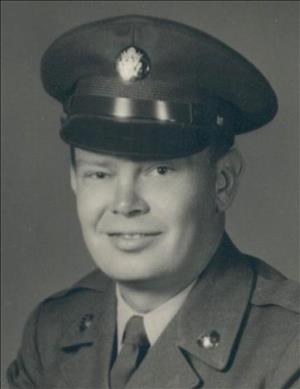 Services are 11 a.m. Saturday at Schroder Mortuary, Colona. Burial is in Dayton Corners Cemetery, Colona. Visitation is Friday from 4 to7 p.m. at the mortuary. Memorials may be made to the family.

He was born Feb. 3, 1930, in Colona, to Arthur and Edna Dobrinski Lundy. He married Hetty Staiger in January 1955 in Ulm, Germany.

He served in the United States Army during Korea, retiring as 1st Sargent

He was an independent truck driver.

He was a lifetime member of Green Rock/Colona American Legion Post 1233, where he was the founder of their honor guard. He also was a member of AMVETS, V.F.W. and 40 & 8 and Green River United Methodist Church. Bill was co-founder of the Green Rock Memorial Day Parade.

Survivors are spouse, Hetty Lundy; children, Patricia Kennedy, Angela (Jeffery) Golightly and Klaus Lundy. He has six grandchildren; 10 great-grandchildren and a sister, Bonnie Stamp. He was preceded in death by his parents; brother, Arthur, who was killed in action in Korea; and sister, Ruth Ann.
To order memorial trees or send flowers to the family in memory of William Lundy, please visit our flower store.